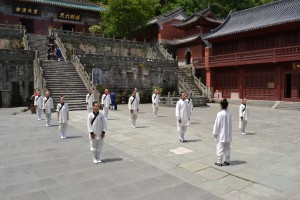 It is a pretty common occurrence here at the kungfu school, and at martial arts schools everywhere as far as I can tell. A teacher corrects a movement or explains a certain technique, and the student objects that the teacher is directly contradicting what the student was taught by another previous teacher. Or a student looks at two teachers demonstrating the same technique or form, and sees that they are very different. “So which on is right?” the student wants to know.

The answer is usually both. Or neither – that is, both versions may be equally valid, though they look nothing alike. There are infinite variables in martial arts, any one of which could produce seemingly contradictory instruction but which the student must strive to unravel to best grow and develop.

One variable is purpose. A given movement can be executed to a great number of different ends. Take a kick, for example. Within the realm of martial application, it could need to be a fast kick, to outrace an opponent’s reactions; a powerful kick, to do damage weather it is blocked or not and force an opponent hesitate; an unpredictable kick, so that the opponent’s reaction is doesn’t stop it; or most likely one of the infinite combinations of these criteria. But a kick could also be intended as an exercise, to improve the body’s strength and flexibility. It might not be something to use in a fight, but nonetheless valuable to practice. And each tiny variation of the kick and its mechanics could change what muscles or skills are being stretched and strengthened, so each variation could have its purpose.

Teachers might contradict themselves and each other when the purpose changes. It might change simply to try and encompass as broad a variety of movement as possible, thus making the student more versatile and flexible. Or the student’s growth could precipitate that change: first they needed to work on one part of the movement, then they need to work on a different part that is best practiced with different mechanics. Or, the technique’s purpose could and should change depending on the teacher’s growing and changing understanding of the movement. The teacher may notice that a movement he or she has practiced with sparring in mind can be altered slightly to become an excellent exercise in balance or coordination. The instructions they give, or even the look of the movement itself, could change very much depending upon the purpose to which the teacher applies it.

While there is no doubt that there is better and worse technique in martial arts, it is not as simple and clear as right or wrong. Martial arts are still an art, a living, growing thing that exists and is sustained by living, growing people. As students, we must strive to live up to the example that our teachers set for us. But that example is not just a set of physical movements. Students of martial arts must try to imitate the sincerity and engagement with the practice that our teachers model for us. And it fall to us to try to understand the “why” of our training, because ultimately we must become our own teachers.