Hunch your shoulders, twirl your mustache, stand in dark corners and people know that you are “the bad guy” but the best stories don’t have villains that are bad, simply for the sake of being bad. It takes a truly gifted actor or storyteller to show the very worst side of a person and still maintain their humanity  the audience’s faith in that humanity. As audience members, we are captivated by good people who are painted into a corner to do things they would never want to do. Just look at your child’s face the next time that they ask to watch Frozen for the seventeenth time… that day!

Every actor and every story teller must be able to have compassion for their character and be able to elicit that compassion from the audience. It is more interesting to watch someone struggle between good and evil then to watch someone running around committing evil acts. If Michael or Vito Corleone simply relished in the dealings of a crime boss for the sake of “being bad” we wouldn’t have had the 374 minutes of the riveting Godfather movies, we simply would have had Scarface.

The responsibility of an actor and a storyteller are very closely related – to keep the audience’s attention. Each character has his own journey that started on the day that they were born and continues until the day that they die. The actor must be aware of significant events in the character’s life, prior to the story and what the character faces at the end of the story. When several character’s journeys intertwine in one story, we call one character’s portion their character “arch”. It is how they change throughout the story. When actors are preparing for a role, they breakdown every moment of every scene so that they know what their character wants at every moment or “beat”.

It is not good enough to say Hook wants to capture Peter Pan “just because”. This is not a strong choice as a storyteller or an actor. It is helpful to not distance yourself from the character. This implies judgment. Actors and Storytellers should strive for understanding. Distancing yourself from the character makes it more difficult to justify their actions. This is why many actors, depending on their method, will use the first person when referring to their character. A strong choice would be, “I want to capture Peter Pan because he is an insolent child and I should be the one to rule over Never Never Land.” Perhaps, later as the story unfolds you realize, “I want to capture Peter Pan because he reminds me of my lost childhood and until I eliminate this reminder I won’t be able to get back to the business of running my crew”. This would be part of your arch.

There are many methods for acting and story-telling and every rule is meant to be broken. A villain that just wants to “see the world burn” can still capture an audience’s attention. Heath Ledger and Christopher Nolan created a chaos-worshiping villain in The Dark Knight so unmoved by the suffering of others and the audience was hooked. However, in the same way that no one comes into the dojo on the very first day and breaks a board perfectly, ten consecutive times, no one should break these rules without diligent study and practice.

Before “Friends” and “How I met Your Mother”; before “I love Lucy” and “I Dream of Genie”; the most popular sitcom was Commedia delle’arte. It began in the early 1500s in Italy. Actors donned masks and spoke an unintelligible language called Grommelot or “emotional babblespeak”. (For an understanding of the impact the Commedia Dell’arte had on theater history, I recommend this video, published by The National Theater.)

Each scene, or Lazzi, consisted of characters from the same collection of stock characters, extrapolated from contemporary society. We studied eight of these characters. Each week the students were given paper mache masks that resembled the commedia mask the actor playing this character would have worn. Then, the students painted these masks, to reflect their interpretation of this character. 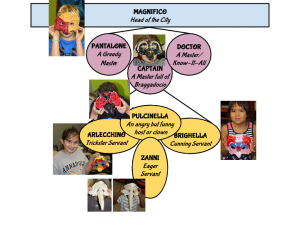 After the masks were completed and the students learned about how the characters moved and thought, it was time to do a BLS Revamp! The campers were challenged to work together to write a story using these Commedia characters. They created a problem based on the character’s desires and flaws. Then, they were asked:

“If you had the whole world’s attention, what would you want to teach them in order to make the world a better place?”

The campers from week #2 focused on the Trickster who likes to take advantage of the foolish and greedy Pantalone. The students created a story in which the Trickster learned that it is better to look deeper and discover the root of people’s flaws rather than taking advantage of them. Or, as they chose to put it…

“Pranking people and taking advantage of their weaknesses only makes people feel like things will never get any better”.

The campers from week #3 made Magnifico the Protagonist and explored the idea of learning to love yourself for who you are. Magnifico resorted to force and magic to earn the love of his people by trying to make himself beautiful but all of these attempts quite literally, blew up in his face! These enlightened artists will never forget that…

“You can only be loved for who you are and that the only thing that matters is who you are on the inside.” 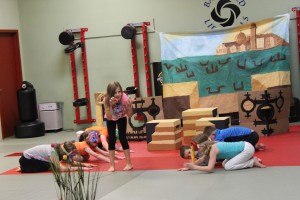 I am so proud of all of the campers for challenging themselves to understand plot structure but more importantly, learning how to be creative and constructive as a team in order to spread such worthy messages into the community. Good Form, indeed! 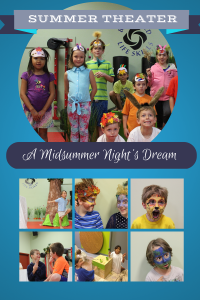 tudents learned focus and respect and collaborated creatively in order to depict the fairies from William Shakespeare’s “Midsummer Night’s Dream”.

Although they may have been depicting confusion and conflict among the fairy kingdom, these students worked together in order to create a beautiful set and make interesting staging and character choices to tell this story.

The older students, playing Titania and Oberon displayed strong leadership skills by helping the younger students and overcome stage fright. Everyone cheered on their fellow actors and reached deep within themselves in order to tap into the creative energy required for this kind of production.

Peaseblossom demonstrated an impressive amount of innovation by leading the charge to write an original story about deforestation so that the animal (and fairy) kingdom will always have a home!

That is right… The Performing Arts Department has lighting equipment and we are not afraid to use it! It is a very exciting time! We purchased four Par 56 lighting instruments, 1 Dimmer, Two stands, a control board, and a whole bunch of gels. Here is a little information about lighting design… 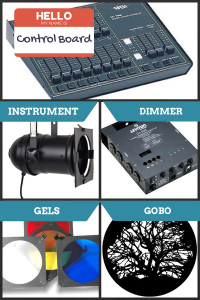 INSTRUMENTS: (A.K.A Fixture, Luminaire, or Unit) These are the actual lights; the lamp/bulb and the metal around it. We are using Par 56 Instruments. Par 56 instruments provide a wide range of lights and are great instruments for learning the basics of lighting design.

DIMMERS: Each instrument is plugged into a dimmer or dimmer rack. The dimmer rack varies the brightness of the light. The same way that a dimmer in your home does, except the voltage here is a little bit different.

GELS: Give the light color

GOBOS: Give the light shape; think of it as a stencil for the light.

HANGING LIGHTS: This is an activity for which the tech crew is responsible, prior to the actors coming in for tech week. Lights are hung at specific angles to give the light direction. It sets the overall tone for each scene. Then, when the actors come in during Tech Week, the direction may be adjusted slightly based on the height and position of actors. 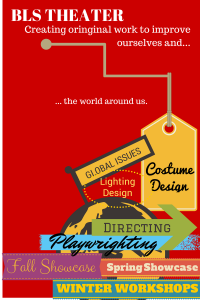 Balanced Life Skills is rolling out an exciting new theater program that will give students the opportunity to change the world. This program will teach students valuable life skills such as diction, movement, research and public speaking while harnessing their imaginations in order to tell compelling stories. They will also be exploring issues that are important to them and taking ownership of all aspects of production for  piece that will engage the community and inspire people to become a part of the solution. Here is a look at what we have planned for the coming year. If you have questions about any of these programs, please contact ellen@balancedlifeskills.com.

Stay tuned to find out how else our students will change the world!