When one person puts another person down by pointing out a weakness or making them feel “less than”, the confidence level of the recipient takes a hit.  When a person looks in the mirror and puts themselves down by focusing on what they have come to believe to be a weakness, their confidence is lowered – not improved on.

In trying to make up for not feeling confident some resort to pretending to be something that they are not – bragging or boasting – to make themselves feel “better than” or in an attempt to make the other person feel “less than”.  We see that kind of behavior in kids with one upping another child.  I scored 10,000 points on such & such game and the next kids say I scored 15 K and on and on.  We see it with kids feeling superior due to where they go to school (private vs. public), where they went on vacation, what they did this weekend, and the list goes on and on. 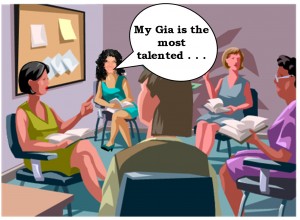 When it comes to adults and parents especially, we live in a culture in which most parents strive to raise ‘star’ children and convince everyone around them that they are stars.  They do this by gushing about a child’s accomplishments, how smart they are, how athletic, how beautiful they are.  Why do people – kids and adults carry on with bragging?   That answer in a moment.

How else does bragging show itself?  It might be shown on the purchasing of material things just to impress others (whether they can be afforded or not).  Keeping up appearances by this kind of activity is no different than speaking the words that are exaggerated to impress others. Still others may take actions to get the attention of others – to impress them with how brave or awesome they are – simply to prove the “better than” superiority.

So whether it is talking to no end about their non existent achievements, spending money to prove how well off they are, or pointing out the weaknesses of others – all of this is bragging and results in lowering the confidence of those that are targeted.  Oh yes the question WHY?

In 2012 a Harvard study found that sharing information about ourselves triggered the same sensations in the brain synonymous with eating food.  So talking about ourselves is rewarding.  In fact, it was found that 40% of what we talk about is our own thoughts and feelings.  So now that we are aware of what and why – the real question for us to consider is, How can we make ourselves feel confident without making someone else feel worse?  How can we make others feel more confident and spread those confident feelings around?

Thoughts on this question this week.

Tamir, Diana I., Mitchell, Jason P. “Disclosing information about the self is intrinsically rewarding.” Cambridge: Proceedings of the National Academy of Sciences. 2012. Web: wjh.harvard.edu/~dtamir/Tamir-PNAS-2012.pdf