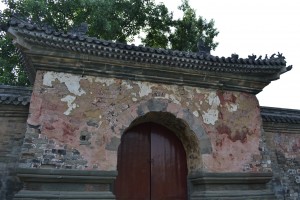 Years ago, Shifu sat my class down for a lecture on Daoism and culture, and in the true Daoist tradition of illuminating paradoxes, began by writing these words on the blackboard:

Which means, “Useful is useless and useless is useful.” He explained thus. Imagine a can of paint. It is useful because you can paint a wall with it, but just sitting there in the can it’s not really serving any purpose, so it’s useless. Take the paint out of the can and spread it on a wall, it is now useful because it is serving its role as cover and color, but now that it is on the wall it can never do anything else, and is really kind of useless to you — you can’t take it off again and spread it anywhere else.

A few years ago, I came to realize that I was not being very welcoming toward short-term students passing through our school. I empathized with them, knowing that if I was a newcomer in a strange place, I would want the people already established there to be friendly and open to me. But my time was all so useful already — I trained many hours a day, and when I wasn’t training I was studying or resting up for the next training session. Every minute of the day was accounted for this way. All my time was useful to me, which made it useless for camaraderie and human generosity.

On the other hand, think of a stereotypical working family man. His time is useful to his boss, to his company, to his family, to his children — but kind of useless to him. When can he spend time on his own health and well-being? He can’t — useless

But sometimes I take some time out of my day and set it aside to be useless. After training sometimes I sit on the stoop of our dormitory and see if anyone comes and talks to me. I don’t always do this, and when I do it doesn’t always amount to much. But that time never fails to be precious in my mind. I have nice leisurely conversations, meet new people, deepen existing friendships, or have a few minutes to reflect on my day, or sometimes I just realize the weather is much nicer than I had previously noticed. My useless time ever proves useful.

There are certainly limits to this, and I think they are frequently defined by the boundaries of moderation and good sense. A useless half-hour watching TV might prove useful, provoking, and stimulating, but a useless 5 hours on the sofa thumbing the remote seems unlikely to yield any rich bounty.

We must strive to be constructive, to be helpful to others, to take care of ourselves, to cultivate our character and our connection with the people around us. But this axiom reminds us that we benefit by making room in our lives for potential that can be realized into new and real concrete good, and by accepting that when that solid usefulness fails, new possibilities are opened.