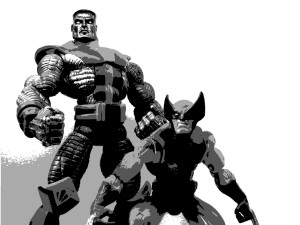 Any description of life for me and my class would be incomplete without some small mention of hypothetical X-men questions. If you aren’t familiar with the X-men, I’ll refer you to the movies that have come out over the last few years portraying these superhero mutants from Marvel comic books, each with distinctive super-human abilities. If you are familiar with the X-men, you may have played this game yourself with some friends. You ask, “Would you rather have Storm’s powers or Rogue’s?” Or “Would you rather be able to teleport or be able to fly?” The question on my mind today is this: which is better, Colossus’s hard invulnerability or Wolverine’s seemingly infinite healing capacity?

Now bear with me. I know this question is pointless, except in that it parallels my own shifting sense of what is healthy. When I was living and exercising in the U.S., I used to think a hard muscle was a strong muscle. I suspect many people out there think the same way. However, others may have changed their minds, like I did. I have come to believe that a happy, strong muscle is soft. A hard muscle is one that can not relax. Either through bad posture habits or chronic mental tension, the muscle is always in a state of contraction. Often this hardness is even a sign of weakness: a muscle in the body that is too weak to do its job efficiently gradually locks down into a sort of brittle death grip. Hardness is a sign of blocked circulation and imminent failure, not strength. A healthy muscle has strength ample for the tasks that will be asked of it, and is able to relax when not called upon to contract. Because it is loose, blood, fluid, and nutrients circulate freely and easily within it and through it to other parts of the body, so it recovers from injury more easily.

I have also come to think about the immune system in a similar way. I feel like in the west no one trusts their immune system very much. We go to great lengths to keep microorganisms outside our skin, because we take it for granted that once they’re in they will do us harm. This seems to me to be a brittle and ultimately futile strength. Though we must be careful not to take in too many pathogens or toxins, accepting that we are permeable to our environment seems vital to me. The body has mechanisms that filter toxins, generate cells, and repair what is broken. We must trust in these sometimes, augment and strengthen them, and they will serve us much better than gallons of hand sanitizer.

Sound familiar? Kind of like Colossus and Wolverine, right? Not so much? Oh well, that doesn’t matter. What I think is important is spreading a more accurate idea of what a healthy body really is. If, when we train, we focus on how to strengthen and augment the body’s natural resilience, we stand a much better chance of weathering the health obstacles that life throws in our path.

Why do I ponder the relative merits of comic book heroes? What can I say — my class spends an awful lot of time together, and these days, who isn’t a nerd at heart?