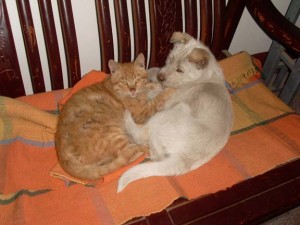 I’ll tell a little story about life here at the kungfu school. Our dormitories are located in a former hospital, in two buildings with a courtyard between. But when I first came here in early 2008, the kungfu school only occupied the front-most  of the two buildings. Shifu acquired the back building shortly before I started studying here full-time.

The rooms of the former hospital had been being used for residence for a while, and there was one occupant who would not leave when the kungfu school took over. In the spirit goodwill, I imagine, no big fuss was made and that man– an older, retired herbal doctor — has continued to live at one end of the dormitory hallway. As a matter of fact, he is my next-door neighbor.

For various reasons, tensions between the kungfu students and my neighbor escalated. Not the least of these was the intrusion of pervasive Chinese culture shock into our ex-patriot stronghold, the one place in China we hoped to call our own. Also, he did not share our training schedule, so when we desperately needed rest he might be having a loud and alcoholic card game with his friends or stomping down the hallway or loudly and revoltingly clearing his throat and spitting on the floor. For a while we even shared a bathroom with the guy, and finding the remains of his having cleaned fish for dinner in your shower drain is never fun. Things bottomed out with multilingual screaming matches in the hallway and hard feelings all around.

But for me there was a significant turning point where my relationship with the guy stopped getting worse and started getting better. That was the moment when I realized he wasn’t going away. I think subconsciously my fellow students acted on the premiss that they could choose not to have this relationship, that if they antagonized him enough, he would move out. When I accepted that he was not going to move out, and that I didn’t want to be the kind of person who would drive him out, the question became not if I was going to have a relationship with this guy, but what kind of relationship ours would be.

There is a degree of satisfaction to be gained just by committing to a thing, that can’t be found while we withhold acceptance of that thing’s actuality. New people or circumstances are like a new piece of furniture that surprises you by appearing in your living room; if you can’t fit it out the door, it is better to rearrange the furniture and make a place for it than to leave it sitting in the middle of the floor.

As for my neighbor, all I really did was smile at him when I saw him in the hallway and compliment him once in a while if I liked his clothes or something. More than my external behavior, my internal behavior changed. When I started acting on the premiss that he was part of my life here in Wudang, his noise, his smelly cooking, his loud TV, it all stopped annoying me because I acknowledged his right to be there.