The third component was best summed up by Winston Churchill when he said, “Success is going from failure to failure without a loss of enthusiasm.” In one word that would be PERSISTENCE. The majority of those that we would consider to be highly successful are also ones that suffered setbacks, one after the other. But due to their persistence they were able to achieve what they set out to do.

Persistence is something that you have to set your mind to from the very beginning. When you begin with a great deal of motivation and self control, it is persistence even in the face of failure that you will experience self discipline and have success in reaching your goals. 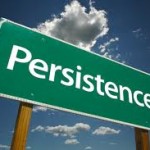 Persistence does not come off the shelf, it cannot be bought – but it is inside each of us already. What keeps some from persisting though is fear of failure, what others might think or how they may look foolish in the eyes of their peers.

So now we have self control, motivation, and persistance and in our next post the final component. You will be surprised by this one as there is a difference in personal _____ and self discipline _____.

Part one: Self Control