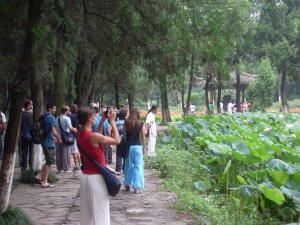 Lately everyone here has been feeling a bit worn down. It has been a long, hot, difficult summer of training. The end, though in sight, still seems dauntingly distant.

So, as a rare treat, Master canceled Wednesday performance and took a group of us to a scenic spot in nearby Xiangyang, a park called Gulongzhong. Gulongzhong is on the map because it was the home, 1900 years ago, of a man who 14th century literature would place right in the heart of the Chinese imagination, a man named Zhugeliang.

Personally, this was an exciting trip for me because I used to live across the street from Gulongzhong, on the campus of Xiangfan University, where I taught English for a year in 2008-2009. I spent a fair amount of time wandering the beautiful grounds of the park, but I never felt that I really knew much about Zhugeliang and the history of the place. I thought that, as well as a chance to visit my old stomping grounds, this trip might teach me some of the history I was missing.

Unfortunately, that wasn’t really the case. We had an endearingly struggling tour guide who managed to translate a few bits of information for us, but these were merely recitations of fairly common knowledge I had picked up just living nearby. Zhugeliang lived on the mountain for 10 years, from the age of 17 through 27. He studied philosophy and military strategy, invented practical devices such as an improved flour mill, and generally stayed in quiet seclusion. His meditations ended when Liu Bei, the leader of one of the three groups consolidating power after the fall of the Han Dynasty, approached him and requested his help. Twice Liu Bei asked, and twice Zhugeliang declined, but on the third invitation, Zhugeliang accepted and took his place in history as the wisest man to shape the Three Kingdoms Period of Chinese history.

Trying to penetrate past this superficial layer of culture has been daunting for me on many subjects, not just Zhugeliang. When I ask friends, or that tour guide, to explain his significance, there seems to be a disconnect in the conversation. Why is he important, why do you like him? Well, he…(see above). Yes, but can you tell me more? Why was he considered so wise? Such a great man? Here the conversation stalls. It is as if his significance is self-evident to everyone but me. I can sense that he resonates deeply in my Chinese friends, but though I agree he is a cool guy, I can’t summon the same emotional reaction I see in them.

My only theory as to why I have this difficulty is that Zhugeliang, even his whole era, exists in the Chinese imagination as a complex of myth, history, cultural and national identity, and modern pop culture. Much of his story comes not from historical record but from a historical novel written more than 1000 years after his death. But this story has been retold so often, most recently in film and television, that legend and fact have blended to make their subjects into cultural giants. As an outsider, someone who has only paddled in the shallows of the deep sea of Chinese culture (And, admittedly, has not read even a translation of Romance of the Three Kingdoms), Zhugeliang’s story might never resonate with me. I imagine it might be like trying to explain George Washington or Abraham Lincoln to a Chinese person. You can tell the story, but the way these men and their stories thread their way through our cultural and national identity, tied into our very system of values, is difficult for a cultural outsider to ever grasp.

One Reply to “Gulongzhong Trip – Rebuffed by Myth and History”