A few weeks ago I had the opportunity to spend a couple of days with Shifu. This is kind of rare for me — he is a busy guy, and I don’t get to talk to him very much outside of class. For that matter, I am usually so tuckered out after class, I don’t really seek him out. But a television show, sort of a variety showcase, asked Shifu to come and bring some of his students to be a feature on the show. So I got to spend time on the train and in the waiting room at the TV station just shooting the breeze with my master.

Lately our training seems to me to have shifted focus. We still do all the same physical training, but it has become mostly a vehicle for our internal emotional practice. So I asked Shifu, “If the goal of this is self-cultivation, why do we do martial arts at all? Why not just meditate or do yoga or something?” His answer was that there is no reason. It really doesn’t matter what you do, as long as you realize that the important thing is not to improve the skill but to improve yourself. Martial arts is really great, and offers lots of opportunity for this kind of development, but another pursuit might work just as well if you approach it with the right spirit. Indeed, “kungfu” in Chinese just means something you work hard at, and could really be any task at all.

It was cool that he said that, because there was a neat example of what he was talking about ready to hand. One of the other people being featured on the show was a sort of street performer/craftsman. He had a little tool box with a little stove warming a pot of molten sugar. He would blow the sugar much like a glass blower would blow glass, making a sort of balloon of it, and then shape it into any one of a menagerie of animals. He would grab up some hot sugar in his toughened hands, and calmly and peacefully pull it and shape it and chat and make jokes. Suddenly the animal would appear as if his hands had minds of their own and did not need him to guide them. More than anything one was impressed, sitting there watching him, by the atmosphere of calm and serenity that seemed to waft from him along with the fragrant smoke of his stove. It was clear watching him that this was a man who had, in the process of mastering his craft, mastered himself.

If I needed any further evidence of this man’s wisdom, we overheard a conversation between him and another performer on the TV show, a guy who rode bicycles across a tiny tightrope. The bicyclist saw me and my classmates and nudged the sugar sculptor, saying, “Foreigners are no good at Chinese kungfu, eh?” To which the sugar sculptor calmly replied, “Of course foreigners can do kungfu. Anyone can do kungfu.” 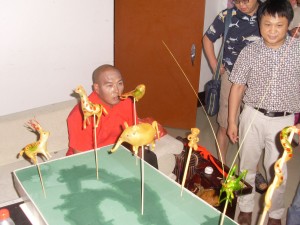 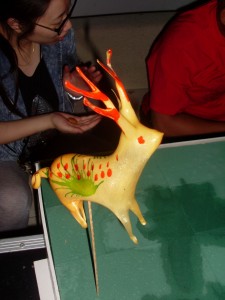 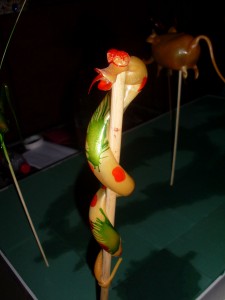 I am back! I have been back in Maryland enjoying the comforts of home for about a week and a half. As with every time I come home, I have been dealing with the challenge of balancing two conflicting urges. One urge is the desire to maintain the healthy lifestyle I have in Wudang. The other impulse it to abandon myself to the rhythm of life here at home.

It is always amazing to me just how difficult this balance is to achieve. Life at home generally means eating too much of the wrong foods, drinking too much, and staying up too late at night. But it is REALLY hard to relax and enjoy friends and family while remaining aloof from the unhealthy behaviors.

In this way, I think I am much in the same boat we all are in during the holidays: we want to indulge because that is the tradition of celebration, but we know that at some point soon we will have to do something to correct the holiday excess.

This is the frame of mind I was in when I read an article my Master wrote last month. He explained to my class his thoughts when writing it. Shifu believes strongly in Daoist methods and their ability to improve people’s lives. But he was concerned because only a few people, like myself, were able or willing to come to Wudang for a long time and learn the techniques. So he wanted to distill the most fundamental part of our health practice and provide it in a more accessible curriculum.

That is how this article and the associated course came to be. Reading it myself, a lot of the “why” information was new to me, but the benefits and methods themselves were familiar: this is how Shifu has taught us to live while we are training. I have been learning this by living it for the last few years. But this article is meant to reach out from traditional Daoist methods and appeal to the more analytical western mind. As a bridge, it may seem a little strange to those standing on either shore, but take a look.

I hope people will consider Shifu’s ideas carefully. Even if you can’t picture yourself hopping on an airplane bound for China in April, I think the article contains insights into healthy living that people in our crazy world need to have.